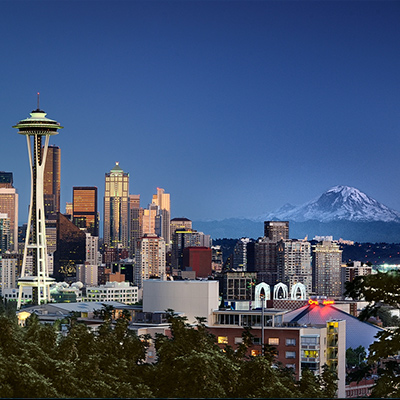 If you are considering moving to Seattle, just ask someone who lives in this amazing city and you will notice that even if he complains about the rain or the traffic, he enjoys this magnificent city and does not have plans to move to another one. Seattle, located between the Olympic mountain ranges and Cascade is the largest city in the state of Washington. It is located 155 kilometers from the border between the United States and Canada and its metropolitan area has just over 3 million inhabitants.

When you move to Seattle prepare to enjoy its spectacular summers, because despite much talk of the rains, Seattle has the best summers in the country. According to studies, more coffee is consumed in Seattle than in any other city in America. This because of the frequent rains.

The public transportation system in Seattle will allow you to decide whether or not to have a car. Buses run along the main roads throughout the day, although at night they are more sporadic.

Are you planning to move to Seattle and are you looking for a reliable and professional moving company? If so, you have come to the right place. At Orlando International moving we have extensive experience in both international removals and national removals. Our long distance movers will provide a unique and stress-free service.

When you move to Seattle with Orlando International Moving, we assign an expert personal moving assistant to Seattle, who will accompany you throughout the entire moving process, providing you with all the support you need.

There are many benefits that we offer you when you move to Seattle with us. Among these are: