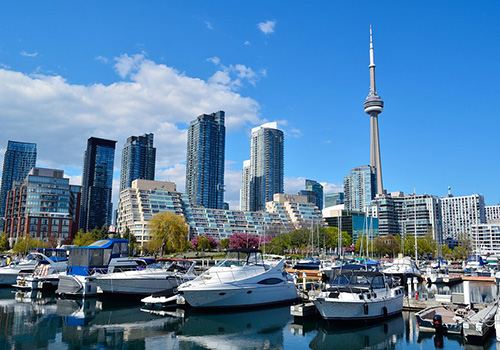 Toronto, Ontario is the largest city in Canada and the most populated in North America (number 5). If you plan to move to Canada and in particular to Toronto, you should know that you will live with an approximate population of 2.7 million people. In the metropolitan area of ​​Toronto, 6 million people live, and according to government planning, it is expected that by 2025 the population will be 7.7 million.

The city of Toronto is located in Ontario, one of the 10 provinces that make up the Federal entities of Canada. Ontario is located in the center of the country, and with 13 million inhabitants it is the most populated entity in Canada.

Unlike most cities in North America, if you are planning an international moving to Toronto you can choose not to have your own means of transport without having any inconvenience. Toronto has one of the best public transportation systems in North America.

Toronto has excellent bus and tram networks that connect to the subway. In Toronto buses are electric and manufactured to reduce air pollution.

When moving to Toronto you will get to know the Zipcar, a service that is used mostly in downtown and that allows car sharing. This service can be billed for hours.

The rail and bus system in Ontario is called GO Transit. This connects the metropolitan area of ​​Toronto with the Toronto Transit Commission. In relation to highways, the 401 is Toronto's main and the busiest in North America.

One of the most recognized universities in the world is the University of Toronto, which has 3 campuses. In Toronto you can also find the York and Ryerson universities, as well as many community colleges.

For teachers, in Ontario teachers are better paid than in any part of Canada, but it is not easy to find work, so many teachers decide to move abroad to gain experience.

Where to live in Toronto

In relation to the different places to live in Toronto, both women and single men prefer to live in downtown. Among the most desired places to live by families are suburbs in the north and east such as Richmond Hill, Markham and North York, as well as the “Halton" region. In these suburbs the crime rate is much lower than in the city. Now, if we compare Toronto with other cities in North America, the crime rate in Toronto is much lower.